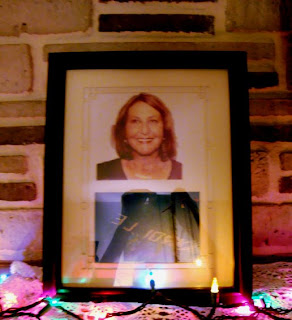 I’ve had wine, not much, then yogurt ice cream,
spooning it from the carton
walking by the fireplace,
your photo on the mantle — a nest
between lights, strung for holiday,
colored
twinkles.

I felt you nodding, your smile,
breathing as I strode past
my eyes with you,
your effervescence
a moment beyond
a tangible reach.

Together, reflecting
as shadows, we both
capture sea into sky,
one thousand years
from now, before
until again.
Posted by Hope Marcus at Saturday, December 20, 2008 No comments:

My Sister Carole, My Love

Four days ago, a full moon and you. I dreamed about you in Spring Mountain or Spring River, and saw your face, with a curly perm no less, like a celebration of confetti. I cried and cried when I woke up. I am only realizing now, you between and into lakes and mountains, everywhere. Anew.
Posted by Hope Marcus at Sunday, October 19, 2008 No comments:

My sister spoke to me this morning, silently in colors. “Quit stalling, stop goofing off —get back to our book!” She said this through the switches that control our workstation.

Two electrical outlets charge my computer, one for the DSL and my computer, and the other for the printers and the hub.

Monday, Memorial Day, my husband turned off the computers but forgot the buttons; red and green knobbies glared yesterday morning. The modem, having been all day and night was warm. I’d scowled.

Last night I closed down, waited for the monitors to click off, flipped two switches and went to bed.

This morning the buttons glowed and modem was not warm. It had not been on during the night. My husband did not turn the computers on before leaving for work. I had not left them on.

Twyla Tharp’s premiere modern ballet had it debut in Miami this weekend, and the innuendo’s just kept coming —limbs, thighs, torsos enmeshed, arms tangling, going into, coming out of, a red stream of cloth, a cat house bed, or a circus banner, take your pick. Tharp’s evocative chorography is about body alignment, changing directions quickly and the Miami Ballet cast was superb. All through people were attracted to one another, attracted to people they shouldn't be, channeling into the darker side of a clubbing lifestyle. Torrid one-nighters, and then beginning again — with a flamboyant strut.

A sense of Cirque du Soleil along with sleazy jazz, splashes of classical, cocky calypso and boisterous horns, flaunting, taunting. Most of the 32- piece orchestra was on stage, a band in the pit, swaggering, bold punk, daring: conquest. I’d not heard of Elvis Costello before, not in a classical sense, not as a master of all tones and hues and shades scored into music.

Nightspot is Ms. Tharp’s vision of Miami as a thrombotic after hours cruise where Latin, rock and classical meet, and where men and women turn up for (entirely heterosexual) scenes of temperament, flirtation, bouts and reconciliation. At the Ziff Ballet Opera House in the Arsht Center, there were whoops and cheers. All deserved for a stunning performance.

Death, Dreams and the Maiden

On your birthday, January 3, my friend Sharon posted my first blog. I cried most of the day, too distracted to make heads or tails of it … our sisterhood cut short, our manuscript only half of itself without you. I need you here, to complete what we started …what we began but could not finish together.

You still come in dreams with that bright smile of yours. Just days ago I hugged and hugged you, you standing in the living room in front of a grandmother clock that doesn’t work, you in a long beige linen dress and a funky shmatelich hat with flappy cloth plumes of beige and brown, matching your dress. You tall and elegant: zany and stately, blending the two like no other.

I called out to my husband, “Look she is really back, come see Carole … .” But he was in the shower and could not hear me; my own gruff voice, hoarse from screaming, awakened me … and you were gone again, my sister.
Posted by Hope Marcus at Friday, January 04, 2008 No comments:

Writing is a passport, a journey born from the crevices of brainstuff, a constant bloodletting going into and coming from.

Why then do we subject ourselves to its elements, those cursed, mottled ideas, afloat, motherless, untethered, waiting to be reigned in, corralled into what? Attainment of exactly what as we slouch towards Bethlehem?